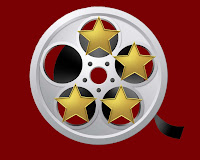 We all still remember VHS tapes, capturing
moments so we wouldn’t lose those memories, but not all moments are precious right? In July 2013, two individuals found some tapes that nobody should see.

The cast helping tell these tales are:
Tape 49: Lawerence Michael Levine as Larry, Kelsy Abbott as Ayesha and L.C. Holt as Kyle.
Phase I Clinical Trails: Adam Wingard as Herman, Hannah Hughes as Clarissa and John T. Woods as Dr. Fleischer.
A Ride In The Park: Jay Saunders as Biker.

Tape 49 – Two private investigators are on the case, searching the home of a missing college student. While searching around they find piles of VHS tapes, so they start watching them to see if it’ll help them out. What they see raises more questions than answers.

Phase I Clinical Trails – Herman is testing out a new optical camera eye after losing sight in his right eye. His new sight is showing him things that are scaring him to death. Is it a malfunction, or is he really having these grave encounters?

A Ride In The Park – A man out for a bike ride comes across a woman in need of help. Unfortunately, her problem quickly becomes his…

Safe Haven – A news crew gets the ok to come into a Indonesian cults compound to interview a man called Father. Wanting some insight on the group, and wanting to shed some light on accusations that he sleeps with the children. It would make for a great news piece. However, their interview gets cut short when father announces to everyone… “it’s time.”

Slumber Party Alien Abduction – After Jen and Gary’s parents leave for vacation, their friends come over to hangout. The day is spent with friends laughing and siblings fighting. The night however is a whole other story, that’s out of this world.

Overall this one was so much better than the first V/H/S. I wasn’t really entertained by the slumber party one, but the others were great. Scripts were really good and playthrough imaginative. Special effects did a awesome job adding to the stories. With the first V/H/S being so good and this one even better, I kinda hope they keep cranking them out.

It’s rated NR (not rated) but has nudity, violence, language and gore.

4 stars for some very twisted tales.